2020 will be a year of refinement for Android phones

2020 will be a year of refinement for Android phones

We wouldn’t blame you if you were a little disheartened by the state of the Android world this time last year. 2018 saw necessary progression in foldable phone technology, 5G, and design, but it all made for a kind of lackluster year overall.

The promise that we’d see real, tangible upgrades in 2019 was what companies were advertising, while 2018 remained a year of minor improvements. It was more a year of teasing the upcoming tech people should look forward to in the coming years, instead of companies actually bringing original modern tech to market.

Now we’re closing out 2019 and I really think this was the most interesting year to be an Android fan since this time five years ago.

The biggest, most expensive new product category in the Android world is foldables, and 2019 gave us plenty. The Samsung Galaxy Fold, Huawei Mate X, and Motorola Razr reboot all showed up in 2019 after being teased in 2018. The Galaxy Fold was the only one out of the three to launch (after a false start) in multiple markets, though, while the Mate X was stuck in China after a hard year for Huawei.

2019 didn’t just give us foldables — it was also the year companies got out of the iteration phase of their update cycles and started bringing new designs to market. One of the biggest criticisms in the tech world in 2018 was the fact that many of the major flagship smartphones were just iterative updates to the phones that launched in the year prior. 2019 changed that.

The Pixel 4 and 4 XL look like the phones Google actually intended to make with the Pixel 3. OnePlus broke out of its repetitive design language and heavily experimented with new designs in the OnePlus 7 Pro and 7T Pro. Samsung removed bezels (and headphone jacks) while adding punch-hole cameras and additional phone sizes for people who want bigger or smaller phones. LG started getting weird with designs again after the dull LG G7. Even Apple’s iPhone 11/11 Pro line received plenty of updates (dual/triple cameras, bigger batteries) that helped differentiate itself from the iPhone XS, even if their designs aren’t wholly different from one another.

Speaking of the iPhone, one design change that helped 2019 phones look less like iPhone copycats is that manufacturers finally started ditching the notch. Pop-up cameras, shark-fin cameras, punch-hole cameras, and even under-display cameras gave OEMs alternative methods of trimming the bezels without adding unsightly display cutouts. I’m happy notches are going away, and it’s only going to get better in 2020.

Android in 2020: Little refinements and a lot of 5G

Companies often find a good design language that works and stick with it for a year or two. Apple, Google, Samsung, OnePlus, and others all made bold design decisions this year, so the odds of them doing so two years in a row are slim. Instead, 2020 will be the year of important behind-the-scenes changes that refine the products that launched in 2019.

5G will be everywhere

I don’t just mean 5G will be deployed everywhere; 5G will find its way into even more conversations than it did in 2019. Companies used it as some sort of futuristic selling point last year, even though there were many legitimate reasons why buying an early 5G phone wasn’t the best idea. In 2020, if you’re planning on buying a new phone, you may not have a choice on whether to get a 5G model or not.

Most smartphones powered by Qualcomm’s Snapdragon 865 chipset will likely have some sort of 5G functionality. Same with devices running the Snapdragon 765. Because these chips make it easier for OEMs to build 5G capabilities into their devices, we’ll begin seeing fewer special 5G variants of flagship phones. For instance, we wouldn’t be surprised if Samsung released a Galaxy Note 11 with 5G capabilities, instead of a Galaxy Note 11 and a separate Galaxy Note 11 5G.

Expect 5G to dominate many new product launches in 2020.

Samsung, OnePlus, LG, Huawei, Xiaomi, Motorola, Oppo, and ZTE have already launched phones with 5G capabilities. You can expect these companies and others to release 5G phones in 2020, too. Apple could jump on the bandwagon, as could Google.

Astute companies know that some of the most dedicated (and coincidentally vocal) smartphone users care about timely software updates. We know users don’t want super fast buggy updates, but people should expect their phones to receive software updates in a timely manner. It’s slowly but surely getting better in the Android world, and we’ll see even more improvements in 2020.

Samsung is traditionally very slow with updating its phones. It’s not uncommon for Galaxy owners to wait months to receive new Android versions, even if they’re buying the latest Samsung hardware. This year, Samsung has been improving things. It rolled out its Android 10 beta program ahead of schedule, and the S10 and Note 10 lines are both getting their stable updates before the end of the year. Nice.

Oddly enough, Google — the company taking software updates by the horns and urging OEM partners to release updates quicker — has been majorly slacking on rolling out software updates on time. Some Pixels might get the new Feature Drops and security updates on day one, but many people around the internet are still running software from October. Personally I think Google will take the criticism to heart and turn things around next year. 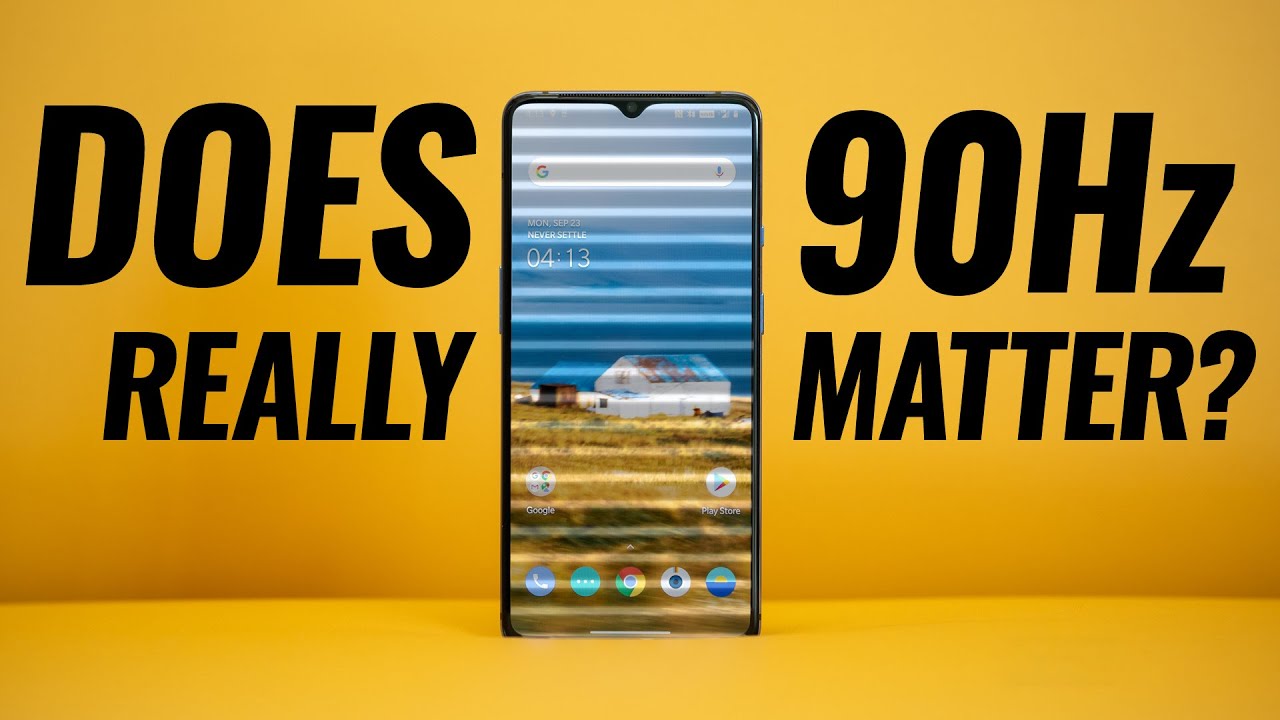 Ever since smartphones became a thing, the go-to display refresh rate has been 60Hz. It still is today. But in 2020, higher refresh rate displays will become even more common than they are today.

As of this writing, only a few phones have something other than 60Hz screens. The Realme X2 Pro, OnePlus 7 Pro, 7T, 7T Pro, Google Pixel 4 and 4 XL, Nubia Red Magic 3, Asus ROG Phone, and Oppo Reno Ace all have 90Hz displays.

Most people may not be able to tell the difference, but once you’ve gotten used to a higher refresh rate display, you’ll never want to go back. I’m sitting here with a Galaxy Note 10 Plus in front of me, but I still prefer my Pixel 4 XL because of that 90Hz goodness.

90 and 120Hz displays are quickly becoming a flagship phone staple. Don’t expect that to let up next year.

If the small Google Pixel 4 exists for a reason, it’s to prove that people care a lot about battery life. I mean, we’ve always known good battery life is a huge selling point, but we can also see with the Pixel 4 how bad battery life can tarnish a smartphone’s reputation. The Pixel 4 will always be known as the phone with the horrible battery life. In 2020, it will (or should) serve as an example for OEMs to do anything in their power to avoid the same fate as the Pixel 4.

It’s a little easier for OEMs to squeeze bigger batteries in larger phones, but we’re hoping companies get the message that most of us would prefer thicker, longer-lasting phones to thinner phones with poor battery life.

If you thought the resolution wars heated up in 2019, well, you’d be right. Don’t expect that to die down any time soon, and especially not in 2020.

I won’t dive too far into this because the venerable Rob Triggs already talked in detail about what to expect from smartphone cameras this year. The gist is that some smartphone OEMs are going to continue to race to the highest megapixel number, even though that’s not necessarily a good thing. Still, it’s nice to see some OEMs stick with relatively modest megapixel counts, so we don’t expect every phone maker to jump on this trend.

The resolution wars are far from over.

Xiaomi seems to be all-in on the high megapixel race. It’s also one of the OEMs ushering in the dual-optical zoom camera movement. Okay, it’s not really a movement yet, but we think dual optical zoom lenses will become more frequent in Android smartphones. It’s a cheap way for OEMs to add additional zoom capabilities to devices with limited processors.

“AI” is one of those terms that companies throw around to make things seem more advanced than they actually are. But in smartphone cameras, it’s actually making a difference. Computational photography is the secret behind Google’s camera success, while many other companies are using artificial intelligence to remove noise from low-light shots. Expect companies to continue to invest in AI photography features in 2020 and beyond.

This isn’t to say we’ll only see iteration in 2020, or that 2020 will be a boring year. Sure, companies will stick to the foundation they laid in 2019. But we’re at the forefront of big, new technologies that will fundamentally change the way we use smartphones going forward. 5G and foldables will bring a much-needed shot in the arm to the smartphone world, as cameras become more advanced and software updates roll out quicker than ever before.

What are you most looking forward to in 2020? 5G, foldables, or something else? Let’s hear those thoughts in the comments.